It’s football Sunday and sexy blonde wife Britney is doing her best to please her husband and his friend as they watch the big game. Wearing a sexy cropped football jersey and white shorts, she pours some chips into a bowl but drops them to the floor as she turns over and gets startled by her husband’s friend, who walked into the kitchen without her hearing him. He helps her pick the chips up from the floor. He’s such a gentleman, much unlike her husband. When he gets up, she notices the big throbbing bulge between his legs. It makes her mouth water. Since her husband is glued to the couch watching the game, she grabs his friend’s bulge and feels its hardness, biting her lip with pleasure and anticipation. He doesn’t think this is a good idea, after all, he doesn’t want his best friend catching him banging his hot wife, but, at the same time, ho wants to bang the hot horny blonde so bad! She pulls his pants down and releases his big throbbing erection, filled with awe as she takes it in her hands and begins playing with it. Big cocks make her stomach tingle and her knees weak. Her husband can enjoy his game while she enjoys his friend’s big beefy dick. It’s big and hard, just like she likes it. She passes her wet tongue from his balls and up his shaft until she reaches the tip and catches the first droplets of precum. The hot babe strokes it with both hands while kissing the tip and stuffing her cock hungry mouth with his boner. She tells him not to worry about her husband; nothing moves him from the front of the screen when he’s watching the big game, NOTHING! She makes soft moaning sounds while pushing his huge dick down her throat and pulling her jersey over her big ripe tits. Yeah, she’s seen the way he looks at them every time he comes over to watch football with her husband. 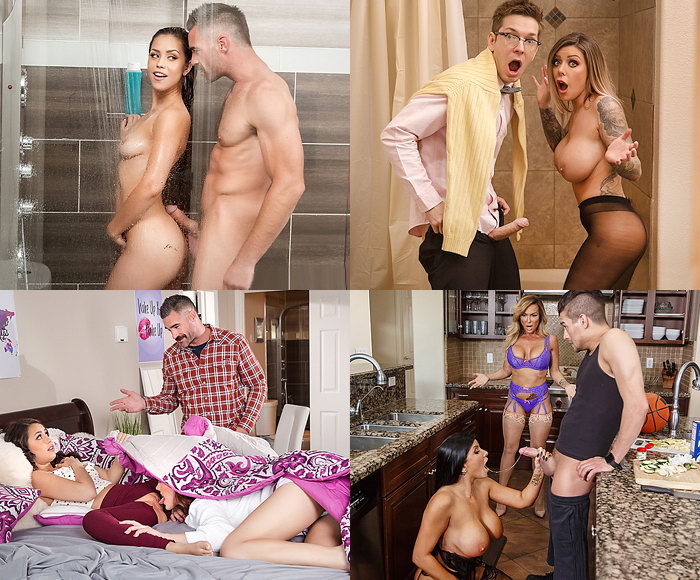 The girl gets down on her knees over the kitchen counter and continues devouring his meaty cock. Then the slut turns over, pushing her juicy bubble butt back up against his face, burying it between her butt cheeks and feeling his tongue licking her asshole and her dripping wet snatch from behind while she jiggles her trunk. Leaning over the kitchen table, he lifts one of her legs up and rams his huge cock deep inside her wet muff and pounds her hard. He sits on a chair and she straddles herself on top, sitting on his lap and impaling her cunt on his meat sword, riding her man’s friend in reverse cowgirl position. God damn this looks incredible. He bends the naked babe over the kitchen table so he can fuck her twat from behind. Jesus H. Fuck this scene is what dreams are made of. She grabs on tight to the tablecloth and looks over her shoulder, exhilarated by how good that big dick feels inside her. Lying on her back and sucking his dick, the naked babe hopes he blows his load before half time!