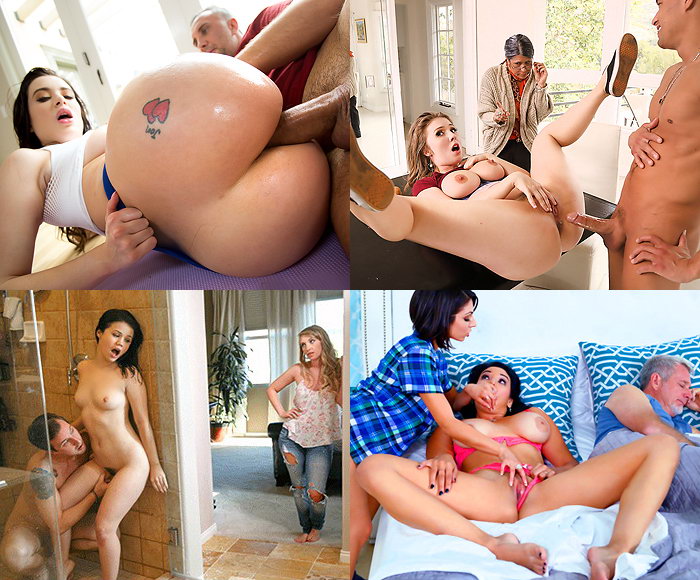 So you know how quickly technology advances, right? Well, it turns out it is advancing way too fast, but these guys really don’t mind it that much. These two sex dolls were up for sale, and they were pretty god damn expensive, but they looked so great that these guys just had to buy them. The dudes brought those two big boxes into their home and they got way to curious and started checking them out but little did they know that those sexy minxes have a habit of coming to life (and fucking you senseless) when you least expect it. Later on, the white dude saw one of the two girls moving, making some weird ass gestures that he couldn’t really understand. Then the other doll started doing weird shit but he didn’t really see it so he decided to move on. Just as soon as he started walking out of the room he noticed that those two sex dolls were actually alive and that they were begging for sex all this time. Might seem a bit weird, but even sex dolls can get sex-starved, no? Well, it makes sense because these two bimbos are probably used to sucking and fucking cocks their entire life. As soon as he got them out of their boxes the girls started playing around with their massive titties. Good lord those are some big titties! Two beautiful fuck dolls were rubbing them against each others bodies seductively but it seemed like they ignored the poor white guy. They did notice him later on though, and they let him suck on their gorgeous titties. And he really did appreciate it. It was sure visible that he loved them as he sucked on the little pink nipples harder and harder. The hot girls got onto the bed without even saying anything the blondie got all up in the brunette girls pussy and started licking it hard. She only started sucking on the clit later on while the dude pumped his cock inside the girl. The dude just couldn’t wait to try the doll’s pussy! The hot blonde got the pussy all prepped up eventually and she decided to give the boy her full attention so she stopped licking the vagina and she rolled over to her side and lifted her leg up so the guy could get a nice grip while he shoves his big meat pole inside her gorgeous love hole. He started fucking her harder and harder until he got a bit tired so then he decided to lay down, but the girls weren’t really done with him. Tho hot naked babes immediately got up on his cock and started sucking and licking it like a pair of horny vixens. OMG, 2 of THE MOST GORGEOUS, PERFECT WOMEN ON EARTH!

THE HOTTEST TEENS AND THE SEXIEST BABES DOING INCREDIBLE THINGS WITH BIG COCKS:

Any man who had such a breathtaking brunette for a girlfriend would not be able to stop himself from teasing her all day every day. Fortunately, this petite and slender cutie is just as naughty and playful as she’s beautiful. When the boyfriend stumbled upon her in the bathroom, she was wearing nothing but a pair of adorable, colorful panties on. With lovely, perky tits on full display, he couldn’t help but stop to stare at her as she was dressing up after a shower. Feeling mischievous, this young beauty fought back the same way; teasing and fooling around. She allowed her boyfriend to play with her firm ass and fondle those tits, but then she asked to grab his raging dick in return. The guy was thrilled at the idea and all but begged her to do it. But, just as she started going down on her knees, getting her boyfriend’s hopes up, she stood up and bounced off, laughing cheekily. He wasn’t going to let such a naughty prank slide so, the next time the guy found this dashing hottie in the kitchen, naked and kneeling in front of a washing machine, he approached her with a boner already out. Surprised, she turned around only to have her pretty face full of veiny dick all of a sudden. Already losing her mind with horniness, this time she wasn’t even trying to escape. Her luscious lips wrapped around that hard shaft and she started sucking. With such a gorgeous young babe slobbering all over his boner, the guy felt he could burst.

Young blonde was doing her regular morning pilates in the living-room while her boyfriend was sitting on the couch watching her. He took out his phone to film her. Her sideboob was showing as he was enjoying the view. She took off her t-shirt to show him her beautiful tits. He turned into a smiley face when she unzipped him and took his cock out. This girl was naughty and he liked it. She started sucking his dick, looking into his eyes, kissing the head of his dick, running her tongue up and down his shaft, fondling his balls with her small hands. Then the sexy teen babe took off her leggings provocatively and got down on the yoga mat. She was teasing her wet pussy and inviting him to fuck her doggy style. He put his stick into her warm vagina and started fucking her softly while she grabbed her tits and showed that she enjoyed it. She started shaking her hips and doing him while he leaned his head back and let her do the job. Her tits were strolling back and forth as she was riding his cock and moaning. Cute naked girl got on the couch and lifted one leg, turned back and smiled. Her pink pussy was dripping with her juices. Her boyfriend grabbed his dick and ran it up her slit. He slapped her perfect ass hard a few times as she was screaming. He was pounding her while she was lying on the couch with her legs up and holding her tits out of excitement. This girtl is just 18 year old but her tits are full and shapely. Imagine yourself pleasing such a beautiful young girl, feeling your cock deep inside her pussy, gripping her succulent boobs. Her body is flawless. Her screaming became louder as his dick was getting inside her deeper and harder. She wanted more and she wanted him to cum inside her. He was delighted with that, so he creampied her instantly after some holding. Cutie dipped her finger into the cream and brought it to her mouth, tasting his jizz.

Ashley and Vanna are two friends who go to the same class in high school. Occasionally, the girls sleep at each other’s house. One day, Vanna came to Ashley for studying. She is very pretty, and she arrived wearing cute, tiny summer shorts, covering her ass solely and exposing her gorgeous legs. Ashley’s dad opened the door, and when he saw a hot redhead teen babe, he got stunned. This young slut noticed it instantly and smiled. His daughter came and took Vanna to her room so they could study. However, after just a few minutes, Vanna told Ashley that she has to go to the bathroom. She came down to the kitchen and saw her friend’s dad’s phone on the table. She took it and made a few selfies with her tits naked. She heard him coming, so she hid in a closet nearby. Ashley’s dad took his phone and saw Vanna’s pictures! When was the last time he had sex with a teen girl? He got so excited that he took out his cock and started jerking. Vanna was peeping from the closet, and she couldn’t believe her best friend’s dad was jerking on her pics. He heard someone in there and opened the door. While he was still in shock of what to do and say, Vanna told him not to worry and put his cock in her mouth! She sucked it so well and enjoyed having her friend’s dad’s cock in her throat. It had been supposed to be a quiet night of studying. However, this little slut only had one thing on her mind… fucking her friend’s dad! Hiding behind the kitchen table, she continued to suck his cock without paying attention to her friend. Of course, she also fucked him in all possible poses in the kitchen, but also on the couch in the living room. Just imagine a young naked girl bend over in front of you, jutting her naked rear end up at you. Taking hold of her firm, young ass cheeks, knead them, spread them. Moving into her dripping snatch with the head of your erection, making her moan louder, before you slip balls deep into the tight, wet, hot folds of her young pussy. This slut didn’t care at all that Ashley might come down. She let him fuck her and abuse her however he wanted, and then she swallowed his cum like a good little teenage cumdumpster that she is.

Bed and breakfast owner seduces the guy and his girlfriend on their honeymoon : Episode 1 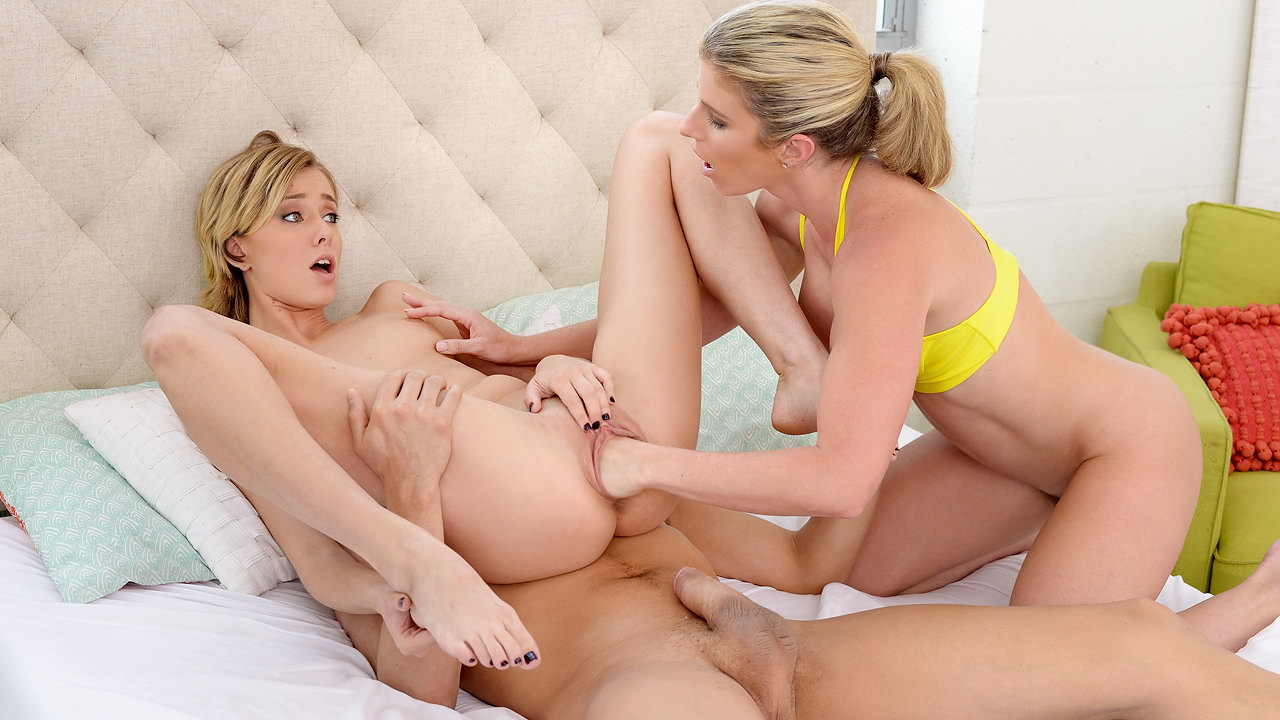