For the first time in his life, Jordi is about to live out a dream he has had since he was just a little boy – visit America! This nerd had just landed in the United States and was looking forward to having fun when he encountered some trouble while going through customs. Two amazing blonde babes, with beautiful faces, perfect figures and huge, round, firm tits were working as officers and first wondered whether he was old enough to travel alone. As if that wasn’t enough, the moment he stepped through the metal detector it went of because he forgot to remove his belt. Officers immediately made him remove the belt so he pulled his pants down revealing his massive, throbbing boner. Surprised as well as becoming instantly turned on, two blondes ordered him to follow them to the backroom for further inspection and strip search. Once they were alone and in private, two blondes took their tops off, revealing their huge breasts and then started playing with his hard shaft. Both were experienced cocksuckers and their curvy bodies in tight, fit uniforms made Jordi’s dick that harder. One blonde couldn’t wait and started slobbering all over his boner after stripping down to her sexy, black lingerie. His size proved to be a challenge as she wasn’t able to swallow the whole length immediately, but she kept trying even while choking. Her friend quickly joined her, after removing everything but her blue bra and panties on. She could take more of his rod down her throat with her friend helping her and pushing her head hard on it. After having a bit of oral fun, the girls were both eager and willing to do something more hardcore so they both mounted him at the same time. 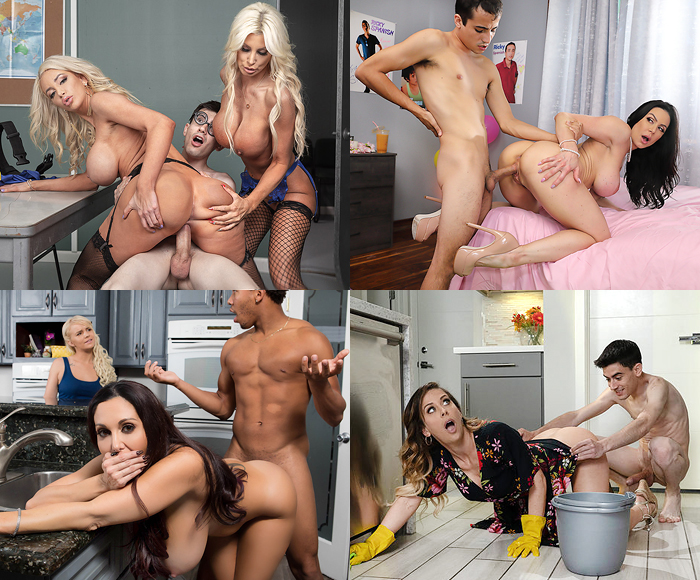 One naked blonde sat on his cock while the other straddled his head and sat on his face, feeling his tongue lick all over her dripping snatch. Blondes might as well have been twins as they were both equally beautiful with equally perfect bodies, riding him in rhythm, impaling themselves the same way. The one riding his face helped the blonde on his meat by squeezing her tits and slapping her ass while she was jumping up and down. Both of the girls were losing their minds in pleasure and were already screaming before they switched places, both wanting to feel his young huge cock and his tongue. The other blonde was riding in the same fashion while her colleague pushed her hips down, helping her impale herself even deeper, and rubbed her tight asshole, enhancing her pleasure. After turning around and riding him in reverse cowgirl, blonde officers were back at sucking on his fat dick. One would try to swallow it balls deep with the other pushing her head down, and then they’d switch, going in circles. From there on out, the naked girls kept trying different positions, licking each other and enjoying his rod in every way possible, constantly picking up the pace. Both blondes came hard screaming from his dick as well on each other’s fingers and mouths, but they kept going until they made Jordi reach his limits and shoot thick loads of jizz all over their bodies. This type of scene is the reason I have Brazzers membership. Big fake tits, two hot girls, stockings, hardcore fuck!