Two stunning housewives were having fun at the pool, showing off their perfect bodies. It wasn’t long before a beautiful brunette was lying on the towel on her stomach and her dashing ebony friend was lying behind her, with her face buried deep in her wet snatch, licking her up. But just as she was about to cum, the third friend arrived, nearly catching the hot lesbian cheaters. The girls had to stop because she’s got a big mouth, and if she spotted them having lesbian sex she was sure to blab to everyone they knew, including their husbands. The brunette readjusted her swimsuit and they went on to wait for the third one to leave. The moment she did, ebony babe went back into the pool, put the brunette’s swimsuit to the side and continued to slobber on her cunt! Her tongue felt amazing as it licked her sensitive clit and puffy, spread-open folds. She grabbed her long hair and pressed her face against her cunt, forcing her tongue deep into her vagina. Yes, only a woman knows how to please another woman, and her husband never gave her so amazing oral pleasure. She pulled her massive, natural tits out, giving the ebony pussy licking slut an even better view. The third wife came by again but luckily didn’t see the black chick giving the cunnilingus because she did a good job hiding while continuing to fuck her horny friend with her tongue. After that, the two lesbians stepped away from the pool because they couldn’t resist anymore and didn’t enjoy being constantly interrupted. The moment the third wife dozed off in the water, the girls pulled their tits out and uncovered their dripping pussies through swimsuits just enough to be able to scissor each other. Their soft moans turned into screams of pleasure and all those loud noises woke up the third chick which took her phone and started recording them. The two of them continued rubbing their shaved pussies against each other, feeling each other’s smooth wetness as they gently glided their hot wet and pussies over the other’s smooth and soft lips.

MOST BEAUTIFUL LESBIAN SEX SCENES WITH THE HOTTEST NAKED GIRLS: 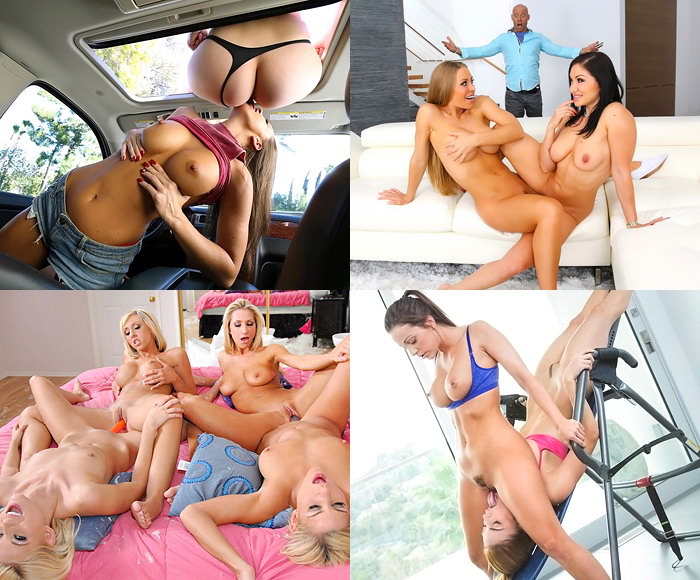 That went on for a while before these naughty babes realized they are being filmed. Their dangerous game got them caught, but these sexy sapphics were too pussy-hungry to care!!! The naked girls were free to go wild at each other. Naughty ebony spread brunette’s legs wide and all the way behind her head and started fucking her pulsating pussy with her tongue. With no one to bother them, both were screaming in pleasure as loud as they could. Brunette decided to return the favor and started relentlessly rubbing ebony’s pussy, making her cum before bending over and having her lick her snatch again, this time doggy style. Black babe even made sure to reward her by sensually licking her tight asshole. After another sloppy pussy licking session, the naked girls ended up scissoring again. Brunette took initiative and fucked her vigorously, pushing her cunt and rubbing herself off of her clit. The lesbians came multiple times, enjoyed a steamy sixty-nine and eventually ended up in the pool where they continued to fuck.