Hot blonde doesn’t get enough lovin’ from her wife, so she finds a guy with a huge cock

Hot blonde doesn’t get enough lovin’ from her wife, so she finds a guy with a huge cock

The beautiful blonde has been happily married to her wife, and even though the lesbians are in love, things are not going well lately. She loves sex and is always up for it, but her lover doesn’t seem to mind about her needs. The same thing is happening today. She comes to her spouse half-naked and practically begs her for sex, but the answer is the same as always. “Babe I can’t. I have to do this tonight, or I’m screwed”, says brunette. Things get more complicated as someone is at the door. It’s brunette’s young employee, and now she is embarrassed because her wife is still going around in her underwear and a see-through shirt. Luckily he doesn’t mind. On the contrary, his smile is showing that he likes what he sees! Still, he is here to do the business, as it’s promised that he’ll be promoted if he can do all the work tonight. Still, it seems like he could face some distractions. As brunette goes away, the hot blonde decides to stay for a few minutes. While her wife is a lesbian, she always liked the boys as well. She is so horny that she would jump on any man at the moment, and he is a fine specimen! She barely controls her urges now, so she speaks to him frankly. “I do love my wife, but sometimes you need good deep dicking,” says blonde with that dirty look on her face. Her pussy is so dripping wet that she can’t spend hours trying to seduce him. She doesn’t mind if he thinks she is a cheap whore, as long as he wants to nail her. Poor guy seems stunned, so while he is in a state of shock, slutty blonde is already underneath the table and unzipping his pants. She is so happy when she finds out that his shaft is a fat monster! It’s not easy for her to put it in her small mouth, but she won’t give up. Practice makes perfect so soon enough, his man meat fills up her mouth. 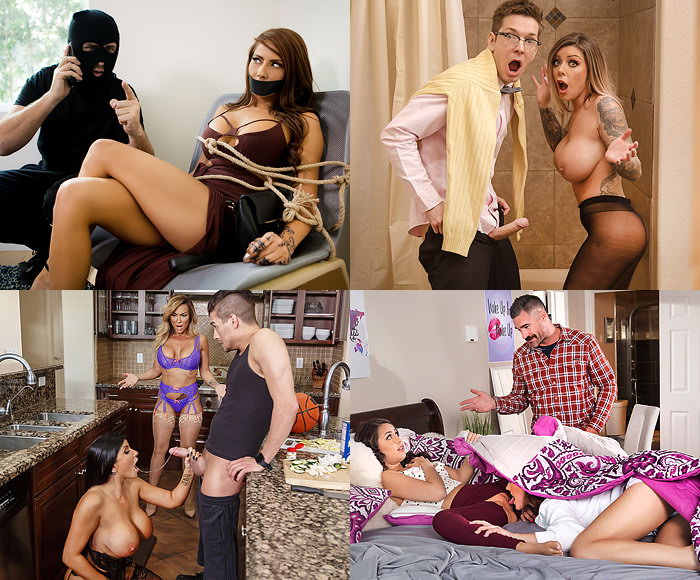 This fantasy almost came to an ending as her wife suddenly appears, asking him what is going on! Luckily, she never saw her blonde under the table! Now that they are sure that the coast is clear, they are butt naked as she lies on the table and he finally nails her dripping wet pussy. She is absolute gorgeous his dick wants to destroy her. She’s been waiting for this for too long! His huge cock feels amazing in her pussy. When the naked blonde starts riding him, she turns into a wild animal, making him fuck her balls deep. It even hurts a bit, but she would rather die than admit that. She needs this impaling so badly and won’t let go of his dick until she comes dozens of times. She keeps slamming herself up and down his big dick as he massages her tits. What a body, her big tits and bubble butt are amazing. Her new lover is willing to give her the best drilling of her life, so they look like a match made in heaven. He is grabbing her blond hair with each hard thrust. He increases his speed pounding balls deep into her young fuck-hole. They are fucking like wild animals moaning and grunting with each thrust. He fucks her hard until he can’t take it anymore and has to cum hard, covering her tight body. This will stay their little secret!