Goddamn, Christmas came early this year! Big titted natural girls are the best! Asses and titts, and asses and titts, and asses and titts. Pussy, pussy… You won’t be able to understand what exactly is going on when these two babes walk into the room. Is the redhead supposed to massage the black haired babe? Nobody knows, all you know is that they’re giving each other incredibly sexy looks and things are going to start steaming up in here really fast. The ginger babe takes some oil and starts spreading it on the other babe’s cleavage and we can immediately tell that the other girl is getting insanely horny from that whole ordeal. The ginger babe won’t go without her own little oil massage as the black haired chick undresses her and then spreads some oil over her tight ass. The busty girls are both even happier when they see their male partner join them and you know exactly how this is going to end. You’re about to witness one of the hottest threesomes that you’ve ever been a witness of in your entire life. And it all starts when they all start making out with each other. One guy and two insanely hot chicks. Then, after they’re done making out, they start to wonder how they’re going to commence their fuck fest. The naked girls decide to have a little bit of oral fun first before they start going into it head-on. First, the guy lies down on the massage table and that’s where he’ll be spending most of his time. Then, the black haired girl sites on top of him with her pussy on his face and her mouth over his cock. It won’t take long for her to start sucking on that big dick but first she has to admire its amazing size. The hot teen babe kisses it and licks it as she gets the oral treatment of her life from the dude who is already licking her pussy from his position. The babe loves that, and she starts sucking harder and faster, all while the other chick gets down on her knees between his legs and starts to lick his balls. The dude has probably never felt such ecstatic feelings before since he is getting this oral treatment from two insanely hot women. But the girls want more so the only thing that they can do to make this situation even sexier is to start riding him and that’s exactly what they do. First, the ginger chick gets her pussy penetrated by him and starts riding him while the other chick is right there and strokes her while she rides. 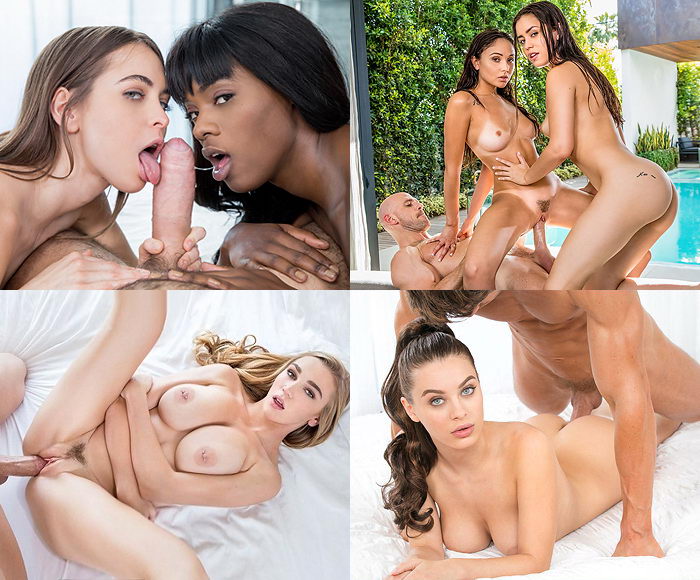 Then the naked girls switch and suddenly it’s the darker girl on top of him. I love seeing those luscious tits and that curvy figure! I love those big natrul titties and the way they bounce, y’all! When her friend is in reverse cowgirl with her right boob bouncing in front of her mouth, that’s a perfect opportunity to tongue her nipple. Three glorious minutes of Autumn’s bouncing boobs in reverse cowgirl. Always a huge fan of the gorgeous Lily Love! Newcomer Autumn Falls is smoking hot. I simply adore this little cutie Autumn. Young (18 years old), pretty with an all natural body….and that tasty little pussy mmm. I would like to taste her juices sticking my tongue deep in that tight wet little hole… The big titted girls ride him both in reverse cowgirl style, as well as in the normal form. One thing is for certain, they can’t get enough of him and his huge, monster cock and that’s exactly why they keep switching the position on him. The hot sex and chemistry between these 3 make this scene one for the history books!